The Great Comberton Show was first held in 1946 and its objective in the early years was to help with the purchase of the school, now the Village Hall, from the Ministry of Education. Once this was achieved, the show continued annually and provides funds mainly to the Village Hall and to St. Michaels’ church to help with their upkeep, and also the Brownie Pack run by Brown Owl – Margot Archer. Over the years this very traditional show has developed into a main social gathering for the villagers and friends.

In the morning entries for the produce show from a wide range of class (fruit, veg, flower, art and craft including a children’s section) are judged and cups awarded. At 2.00pm the show opens to the public with live music, dog show(entries on the day), classic car display, cream teas, bar and much more. Once the visitors have left, the residents and guests move into party mood with a very well earned pig roast which often goes on to the small hours.

On looking back over the years after the outbreak of the Second World War, soon after we came to Tibbetts Farm.

I realised what we did to ease the tension.

Oh in those days the two Combertons had a combined W.I. We used to hold fetes in the Old Stow Barn in Little Comberton to raise funds for various objects.

One was the Welcome Home fund for those of the two villages who had gone to the War. Then afterwards we held concerts in the Old Reading Room, Great Comberton.

Also we hired a marquee and held a Peace Celebration in the paddock and orchard at Tibbetts Farm Great Comberton.

Meanwhile the W.I. put on two Fruit and Flower Shows the first at Little Comberton Village Hall and the following year at Elmley Castle in the old Village Hall. Then the Next season we started the Great Comberton Flower Show in the Leys at Kents Farm on September 21st 1946.

It was held in the Reading Rooms Great Comberton, and a committee of 16 was formed, with Mr H Coombe as Chairman, Mr W Revers as Treasurer, and Mrs H Coombe as Secretary.

Along with the fruit and flower show various ‘side shows’ were organised. Hoop – la , Ring the pegs, Rolling Pennies, Donkey/Pony Rides, Bowling for a pig (given by Mr Wright. In later years this became a bottle of Whisky), guess the weight of a cake and name the doll and Mrs Revers was to enquire about a fortune teller( who came along all the way from Ashton Under Hill). Mrs Salt was asked to open the show and give out prizes. The show was a success with a profit of just over £59 raised. 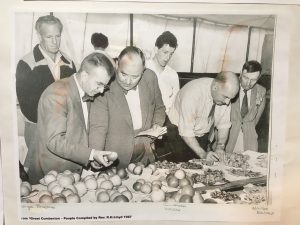 At a meeting following the show it was confirmed by Major Davis that the school would definitely close and further fundraising events were organised. The school was valued at £2000 with an additional £900 for the school house.

The official opening of the Village Hall took place on Saturday 2nd December 1950 at 7.00pm.

The show has run every year since except in 1967 when it was cancelled due to the outbreak of Foot & Mouth disease. The show restarted in 1968 with the added attraction of a dog show.